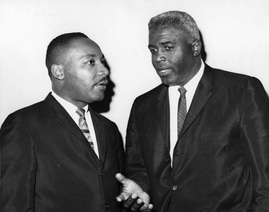 The Civil Rights movement all started with one tired woman who had a long day at work, and refused to give up a seat on a Alabama bus. Rosa Parks was arrested because she would not give up her seat for a white woman, and she spent the night in jail. This sequence of events led to the Alabama Bus Boycott, organized by the Reverend Martin Luther King, Jr. Another event that took place after the Rosa Parks incident was the Freedom Riders, where a white group of people would sit in the back of the bus, and a group of blacks would sit in the front of bus, which led to brutal rioting. King, and a Muslim black named Malcolm X would be the two leading Civil rights activists in the 1950's,

Jackie was the chairman of the Nation Association for the Advancement of Colored People's (NAACP)"Fight for Freedom" campaign, which he traveled around the country, where he would speak at banquets and give lectures. In 1958, Robinson was elected into the board of directors of the NAACP. However, some members of the NAACP were not to fond of his approach, saying that he was too "militant" in his approach to racial segregation and exclusion in the South. He openly criticized the NAACP for not being strong enough in the South, were Jackie believed that they were needed the most, Some activists during the time thought that Robinson was outspoken, and Malcolm X alienated him.

There are many pieces of evidence that Jackie was a big part in the Civil Rights Movement. Robinson wrote letters and telegrams to Presidents Eisenhower, Kennedy, Johnson, and Vice-President Nixon. In his first letter, which was send to President Eisenhower, he states that he once heard the President say that the blacks must wait. He respectfully tells the President that they cannot wait to gain the free rights of men that all men were granted 150 years ago. In his second letter to President Kennedy, Robinson openly says that Kennedy will be a great  President, but he will openly criticize him if Civil Rights are not on his agenda to come. These letters show that Jackie Robinson is a strong person and will not back down from anyone.